Let’s start by seeing how we would play these two numbers on the opening roll itself, before White has a chance to move. Then we’ll consider how White’s actual play has changed the dynamic of the game.

But we were all wrong.

In the 1990s, the bot rollouts demonstrated that splitting with 13/9 24/23 was solidly better than slotting with 13/9 6/5. The reason, however, wasn’t because slotting was just a bad tactical idea. (In many positions slotting is a very, very good idea; for example, with an opening 2-1, slotting with 13/11 6/5 is the right play.) Slotting is bad here because it’s unnecessary. After 13/9, Black has so many rolls to create a good blocking point next turn that creating extra risk with 6/5 isn’t efficient. Instead, Black should just play 24/23, creating new possibilities on the other side of the board.

So splitting is best with 4-1 on the opening roll. But now we see that White has moved first and played 13/8 13/11. How has this changed the position, and how does that change affect our choice of moves?

White has brought two more builders down into his outer board. That change has two effects:

> White has a few more rolls to make an inner-board point.

> White has 8 checkers in place to attack in his inner board, rather than just 6. (The first two checkers on his 6-point don’t count because White isn’t going to move them under almost any circumstances.)

The extra rolls to make an inner-board point don’t mean too much. However, the extra attackers mean that Black is less inclined to split his back checkers than he was on his opening roll. However dangerous splitting was before, it’s more dangerous now, because White has more attacking power to unleash.

Meanwhile, slotting with 6/5 has increased slightly in value, because of duplication. By playing 13/11, White’s subsequent rolls of 4-1 and 6-4 have increased in value, since both now make White’s bar-point. So it’s less expensive for Black to slot, since those hitting numbers don’t represent the cost they used to. It hurts somewhat to get hit with 4-1 and 6-4, but not as much as if the numbers had played poorly otherwise.

Conclusion: Black is now more inclined to build and/or slot than he was before, because splitting is now more dangerous and slotting is less costly. So the value of 13/9 6/5 rises in relation to 13/9 24/23, and in fact it becomes the preferred play.

This insight leads to a very powerful general rule for playing the second move of the game: In general, if you have a choice between a building play and a splitting play, you want to mimic what your opponent did on his opening roll. If he brought down builders, you want to bring down builders. If he split, you want to split.

Of course, this rule can’t be followed to absurdity. If you can make a strong point or hit a blot, in general you will do that. Hitting and making points trump all the subtle plays. But in the absence of such powerful alternatives, let this rule be your guide.

Now, some quick comments about other suggested plays.

In Part (a), a couple of readers wanted 24/20 6/5. This is the famed “double slot”, also known as the gonzo or kamikaze play. It’s almost never right. When you slot, you don’t want your back checkers split, because you’re hoping that your opponent misses the slot and you then have your whole roll to cover the slotted checker. If your back checkers are split, your opponent can try to attack you there, and while you’re coming in from the bar, you have fewer rolls to cover your slot.

In Part (b), there was a vote for 8/5 13/11. In general, when you slot a point, you don’t want to slot with the last spare from another point. Spares are a big positional asset in the early game, and stripped points are a weakness, so you try to maintain your spares as much as you can. 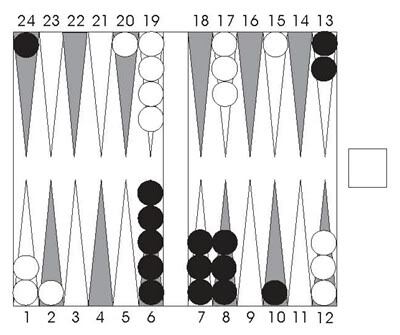 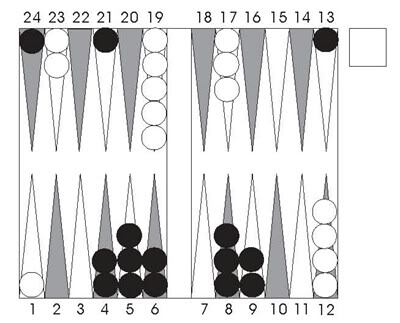 Problem 82 isn’t difficult, but it contains some interesting points.