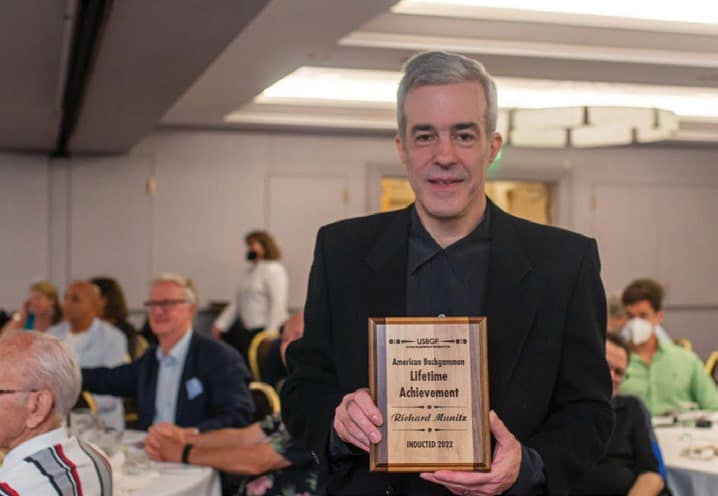 As of this writing, he ranks fifth on the all-time ABT Points list, which means he has more ABT points than all but four players in the USBGF Hall of Fame. He has been voted to the Giants of Backgammon List four times, including three times in the top 32. As of December 2021, he had the highest Elo rating in ABT matches of any player with at least 50 experience points. While he has achieved greatness as a player, his contributions as a volunteer, organizer, and director may be even more impressive.

Rich was a founding member of the USBGF. He has served on the board of directors since its inception. He has volunteered thousands of hours of his time helping advance the participation and orderly enjoyment of the game. He is among the two or three people that have had the most impact on organizing and growing the USBGF and backgammon in the United States. Much of what Rich does and has done goes under the radar and is not fully appreciated by many.

Here is a list of a few of the things Rich has done:

•  He has chaired the USBGF Rules and Ethics Committee and Ratings and Stats Committee.

•  He developed the USBGF’s Master Points System and the points-calculation software.

•  He developed the ABT points formula for Swiss and Round Robin tournament formats.

•  He has authored a recurring column in PrimeTime Magazine, “What’s the Ruling?”

•  He arranged for the acquisition of the backgames.org system by the USBGF.

Any one or two of those accomplishments, along with his 13 years of service on the Board, would be enough to warrant a Lifetime Achievement award, but, in totality, his contributions are mind-boggling. As an organizer and director of the New York City Backgammon Meetup Club, he has helped attract 2000 registered members, which is far and away the biggest club in the U.S. and one of the largest in the world. He teaches beginners and intermediates at the club, and he cultivates grass-roots development of casual backgammon play in New York City, where the 2020 NY Metro had 81 beginners! Most tournaments are lucky to have eight, if that. As a mediator and diplomat, he has fostered good working relationships between the USBGF, directors, and players through instituting good governance practices and collaboration on Rules and other policies.

As a result of his years of work, he’s been able to provide a suite of tools to greatly reduce the overhead and barriers to entry of running backgammon tournaments, which will greatly help to grow the game. No one else could have done it like this. Rich has worked tirelessly to ensure the game of backgammon is enjoyed by so many others, and that the backgammon community will thrive for generations to come.